Horror in Dominion: Who killed the Stetka family?

According to the official report, the fire that killed the Stetka family in Dominion, Cape Breton in 1906 was a horrific tragedy, one akin to the one that befell the Barho family in 2019.

The jury findings used words like “mysterious” and “suspicious” in describing the fire and its aftermath. The coroner’s report failed to find a cause of death. Yet the official final report stated that, in the case of the Stetkas, no crime had taken place.

More than a century later, there are many nagging details about those deaths, some which point to, if not a cover up, then at least gross incompetence on the part of the head of the investigation.

Regardless, it is irrefutable that something very bad happened in the Stetka family household the night of February 15, 1906. That something was possibly the first mass murder in Nova Scotia history.

In February of 1906, Dominion was still known as Bridgeport and had not yet obsequiously taken on the name of the Dominion Coal Company. Even after the name change, some locals stubbornly referred to it as “Old Bridgeport.”

The Stetka family had moved to Bridgeport from Austria a few years earlier. The family of four, including a four-year-old daughter and two-year-old son, settled into a five-room, one-storey house owned by the coal company. They all slept in one room adjoining the kitchen.

The family patriarch was named Anton, who toiled in the mines for subsistence wages like so many others before and since. In the many articles I have read from newspapers throughout North America, I have not been able to find the names of the other family members.

In January, a co-worker of Anton’s, a Newfoundlander named James Snelgrove, attempted to rape Mrs. Stetka. He was arrested and jailed and eventually sentenced to four years in Dorchester Penitentiary for this, but in the meantime her refusal to back down on pressing charges against him caused ill will in the tight-knit community.

The rapist’s mother lived a few doors down. Her attempts to broker peace with Mrs. Stetka, even with financial enticements, were unsuccessful.

I don’t know if the term “Come From Away” existed in 1906, but even unnamed, its effects were likely more pernicious then than they are today. Mrs. Stetka’s refusal to back down in her desire to press charges against Snelgrove made living in that community increasingly difficult.

They no longer felt welcome. The Stetkas decided to return to Austria. So keen was their interest to leave town that Mrs. Stetka was not even going to testify at Snelgrove’s trial.

On the 15th of February, Anton met with the mining company president, Henry Mitchell, to talk about bringing his employment to a close. Mitchell was too busy to deal with him, but told him to return the following day. Later that day, around supper time, Anton picked up his pay envelope.

People saw lights on in the house late that Thursday night, past midnight into Friday. Speculation was that they were packing for their impending move. By 1 a.m., Engine 661 was pulling into town when the engineer noticed that a house was on fire. They sounded the alarm before he and his fireman rushed to the Stetka’s house, which was fully ablaze and would remain so for several hours, until it collapsed.

Newspaper reports on February 17 all told of the horrific sights in the remnants of the Stetka home.

Anton Stetka had been beheaded. A bloodless axe was found in the shared room. His wife and the two kids had all been beaten to death with some kind of blunt instrument. The wife was separated from the others, “an aperture in her head,” and the two children, their heads “broken on the left side,” were still in their bed clothes and covered by blankets, and were holding each other in death.

One newspaper described the children as “cooked.” The parents were unrecognizable.

There was another report that revealed that a family dog managed to escape the conflagration after a neighbour smashed the door open.

As was the custom at the time, a jury was empaneled literally before the ashes could cool. Over the course of the next eight days or so, around 30 people were called, some more than once. The children’s bodies were exhumed for more analysis.

The Cape Breton Post microfilm at the Archives is so old and brittle and browned that it is impossible to read, but the articles from that period are very long and detailed. However, other newspapers such as the ones in Halifax and even papers in the United States all indicated that there was no evidence pointing to James Snelgrove having any role in the Stetka’s fiery deaths.

There were other potential motives, robbery being one of them, but keeping in mind that Anton’s paycheque would be so miniscule as to not warrant such a horrendous crime, that was soon discounted.

The Attorney General at the time decided to dispatch the infamous Nicholas Power, newly installed as Halifax’s chief of police, to preside over the investigation.

For those of you who decry some of the decisions made by the police today, you will be disappointed to learn that they are nothing new. By the end of February, police filed an official report stating that no crime had been committed, that the fire had started through some “mysterious” means, and that the family had been overcome by the smoke and flames.

Power pointed to another fire that had ravaged another family household in the intervening days as proof of his theory. The fact that Anton Stetka had been relieved of the burden of combing his hair and brushing his teeth before he could be burned to death in the early hours of February 16, 1906, did not appear to influence Power’s decision.

Let us be generous and characterize Nicholas Power’s 30-year-plus record while working for the Halifax police — he was chief for only 18 months, finishing in November of 1907 — as one with interesting highs and lows.

Indeed, forensics expert Debra Komar wrote a book about how a man in Bear River was lynched over a murder he did not commit, due to Power’s false accusations and trying the case in the media.

Bob Gordon produced an article for Halifax Magazine about Nicholas Power in 2015 in which he cites other instances of mistakes that Power made during his career with the cops, and is reportedly working on a book about him.

I feel confident in adding the Stetka inquiry decision to the list, and am working on yet another article in which Mr. Power figures prominently.

Fast forward to 2017, when writer Bill James, best known for his sports books and his decades long affiliation with the Boston Red Sox, and his daughter Rachel McCarthy James, produced a book called The Man from the Train. In it, they trace the career of what they call “America’s Most Elusive Serial Killer.” A lumberjack/woodcutter by trade, and itinerant and peripatetic by nature, this man would get on a train and jump off in small towns, mostly in the U.S. Midwest.

Whenever his urges surfaced, between 1898 and 1912, he would case the given community for a house where the windows could easily be opened and closed, where there were children’s toys strewn on the yard, where there was a young family living.

Late at night he would break into the home and kill the family with the blunt end of an ax that was laying around the property. He would cover the windows, and sometimes the mirrors, and block the exits, and often sexually assault the pubescent girls in the residence, postmortem. He would often set fire to the house in an effort to cover up his crimes.

Then, he would just hop on the next train out of town and continue on his way. It was not until 1911 or so when a few people noticed there had been similar murders over the years, but not until Bill and Rachel’s book did anyone attempt to link all of these crimes.

The writers assert that the man from the train killed 101 people in this way. Due to the rampant racism of the day, more than a few African Americans would be blamed for these deaths and lynched. Others went to jail because they had not got along well with the victims. The Man from the Train got off scot free.

The most notorious murders ascribed to this man occurred in Villisca, Iowa, in 1912, when six members of one family, along with two house guests, were slaughtered in a method similar to how the Stetka’s were.

By this time, 14 years into his killing spree, he had perfected his technique to what he might have called a fine art. So infamous are these murders that if you enter “Villisca” in any search engine, the murders will come up before anything else related to that town. There is a thriving, some might say disturbing, tourism industry centred around the Villisca murders.

Bill and Rachel argue relatively persuasively that The Man from the Train killed the Stetkas, but admit that they don’t know for sure, which is eminently true, because nobody does.

However, there are enough similarities to previous and subsequent murders that it would be foolhardy not to at least acknowledge them.

Former Herald scribe Dean Jobb, in the online column he writes for Ellery Queen’s Mystery Magazine, does not discount this theory, but wonders why The Man from the Train would go on a 2,000-mile detour in the middle of winter just to satisfy his bestial urges.

The writers speculate that he, being a fellow Austrian, perhaps knew the Stetkas. Maybe he had worked there before. There are often long gaps between his atrocities, and the Man from the Train often had lots of time to… kill.

I believe the Stetkas are buried in the Catholic cemetery close to where they died. 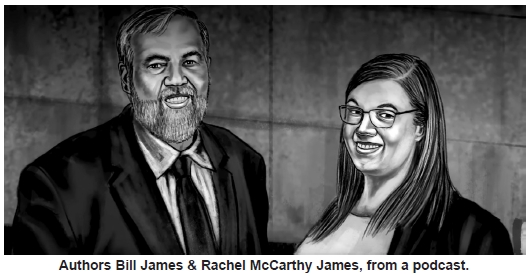